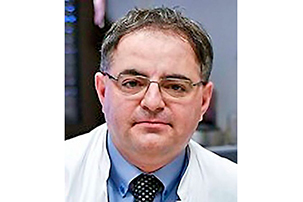 Assistant professor Dražen Pulanić, MD, PhD, specialist in internal medicine, subspecialist in hematology, scientific advisor, employed at the Division of hematology, Department of internal medicine, University Hospital Centre Zagreb, and at the Department of internal medicine, School of Medicine, University of Zagreb. Assistant professor at the Josip Juraj Strossmayer University of Osijek, Faculty of Medicine.
Born in Zagreb, 1974. Graduated from the School of Medicine, University of Zagreb, 1999. MSc in 2003, Phd in 2006, School of Medicine, University of Zagreb. Research associate 2007, senior research associate 2010, scientific advisor since 2016.
His scientific and professional interests are hereditary and acquired diseases of hemostatis and thrombosis, non-malignant hematologic diseases, chronic graft-versus-host-disease, and multiple myeloma. Education in the USA on several occasions.
Co-worker or leader of several scientific projects, mentor of five graduate theses, five doctoral theses, published 117 professional and scientific papers (48 in CC/SCI), co-author in 12 medical books, co-editor of one university textbook, published 137 congress abstracts. Since his undergraduate studies up to now editor-in-chief or member of the editorial board of several medical journals. Rector’s award for the best student paper 1996/1997.
Head of the Multidisciplinary team for the treatment of chronic graft-versus-host-disease and long-term complications after hematopoetic stem cells transplantation in the UHC Zagreb (since 2016). Leader of the scientific research project New biomarkers of chronic graft-versus-host-disease of the Croatian Science Foundation (2017-2021). Croatian representative as the member of the Board of the international European project on chronic GVHD of the European cooperation in science and technology – Integrated European network on chronic GVHD (COST Action CA 17138, cGvHD Eurograft) since September 2018, and leader/co-leader of two working groups of this international project – Working group for diagnostic criteria and response to cGVHD treatment, and Working group for epidemiological platform.
Head of the Working group for benign hematologic diseases of the Croatian cooperative group for hematologic diseases KroHem since May 2018.
First winner of the Annual award of the Croatian cooperative group for hematologic diseases KroHem for excellence and achievements in scientific and professional work in the field of hematology in 2017.
Member of the Croatian Medical Association, Croatian Medical Chamber, Croatian cooperative group for hematologic diseases KroHem, Croatian society for hematology of the CMA, Croatian Academy of Medical Sciences. Member of the Working group for development and promotion of multidisciplinary cooperation in the field of oral and general health of the Croatian Ministry of Health, Committee for professional development of physicians of the CMA, Board of the Zagreb branch of the CMA (since 2017), and Board of the Croatian society for multidisciplinary cooperation in dental medicine of the CMA (since 2017).